How I am training currently #2

People sometimes inquire after my training approach because, foolishly, they don’t know that I am actually this well-known scientist: 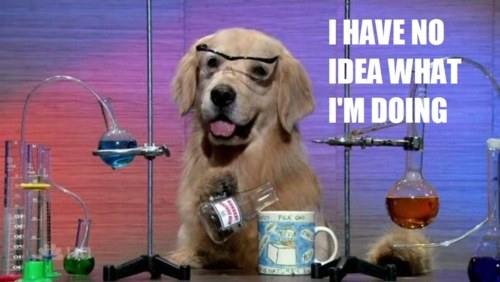 How I am able to pick up an Erlenmeyer flask without opposable thumbs is left as an exercise for the reader.

Nevertheless, my last post on training raised a modest amount of interest. Given the events of the past few months I figured it was time to give an update.

Recap of the Program

Essentially I aimed to use strength-oriented training and strength-biased hypertrophy training with a focus on the upper body (because my knee would not support lower body training).

The program as adopted worked very well for hypertrophy. Even though I did three strength days and two hypertrophy days per week, I grew noticeably larger in two runs through the plan (2 months). I also grew stronger. About 4 months ago I could barely perform a bench press single for 110kg. After 2 months on my program, I was able to reverse grip bench press 120kg for triples, after no performing no direct bench press training whatsoever.

Because the training was confined to upper body work, I was able to work very hard on most days without becoming too systematically tired.

After the first month I had slight elbow soreness and during my deload week I took 4 days completely off. During the second month the soreness came back with a vengeance. I used topical diclofenac gel to get through workouts. By the end of the second cycle my elbows were pretty much shot and I had to take the whole deload week completely off.

Upon investigation, it transpires that I am a dipshit. Yes, you can train through elbow pain. But eventually it can progress from tendinosis through tendinitis until you reach a stage in which only surgical options are available for treatment.

The problem is the total volume of my program. Or more accurately, the volume of the strength days. 10x3s at 85%+ intensity is punishing to the muscles and CNS, but it’s more than my elbow tendons were ready for. It’s possible that I could work up to that volume in future, but first my tendons require a lot more work to become sufficiently conditioned for the volume.

This is a classical problem for strength athletes, especially those who turn to the darkside and embrace anabolic steroids. Tendons are only poorly served by blood vessels and so take a long time to recover; muscles by contrast are richly supplied with blood and respond well to intense exercise. As time goes on the deficit between muscular and tendon recovery becomes sufficiently serious to cause injury. Elite, untested powerlifters are notorious for tearing tendons out of insertion points because of the muscle-strength : tendon-strength deficit.

The other side to the problem is that tendons never catch up in the same way muscles can. I am sufficiently conditioned for strength training that I can be more or less fully muscularly recovered within 72 hours, regardless of the volume or intensity of any training session. Within 3 days, if I’ve eaten enough and slept enough, I am able to attack 95%+ with gusto.

But tendons simply take longer to recover. By training previously barely-used joints heavily 3 days per week, I put them further and further behind. The weaker and more inflamed the tendons became, the more damaging each session would be.

When I returned for my third cycle, I decided to alter my exercise selection (to avoid accomodation — see Zatsiorsky & Kraemer for a discussion). Initially I looked at bench press, but even after a week off my elbows complained. Then I tried swiss bar bench press — again no. Finally I’ve had to switch to reverse-grip bench press on strength days to minimise elbow pain.

A week into the third cycle I came down with a nasty cold and was out of commission for 11 days. I think this gave my elbows more time to catch up. However the cold has taken a bunch of strength in its wake and those 120kg RG bench presses have become much, much harder.

What I am doing now

Training around injury and soreness has defined the design of my current training. Because of the illness and interruptions, I don’t have a properly set cycle.

One thing I am doing is incorporating a lot of work for prehab and rehab of my elbows. Just as I have found face pulls to help with pressing volume, I am finding that a mix of light bicep curls, wall pushups and band expansions to be helping my elbows to stay under control.

Similar, exercise selection has been shaped by a desire to give the elbows as little excuse for complaint as possible. 8×8 incline DB presses have been swapped for 8×8 BTN
snatch press (or OHPs when the snatch press isn’t possible due to a nagging trapezius strain). 10×3 seated OHPs have been swapped for 3×3 reverse-grip bench press. I’ve also swapped the ordering of days. Currently I have three hypertrophy days and two strength days.

The key here is that tendons respond best to low intensity, high volume training. The kind of training I would usually avoid because of its inhibitory effect on strength is now part of my rotation to keep the elbow trouble in check. Because I will need those elbows as soon as I start snatching and jerking again.

The elephant in the room

And speaking of that. My knee diagnosis has changed dramatically. What my doctors thought was a torn meniscus turns out to be something much more insidious: osteoarthritis.

My left knee cartilage is unevenly worn, which is the cause of the pain. In turn this has been caused by incomplete activation of the VMO or “teardrop” muscle head in my left leg in the top 15 degrees of extension. So weight in that leg would be unevenly distributed across the heads of the femur and tibia bones, meaning that the cartilage on one side is mostly gone.

There is, unfortunately, no way to heal that damage. There might be in future, but not right now.

My doctor prescribed a series of rehab exercises to improve activation of the VMO in the top 15 degrees and so far there’s been progress. I’ll also be receiving a course of injections of “synvisc”, a substance meant to provoke improved synovial fluid production. Synvisc is a major treatment for osteoarthritis these days and hopefully it will help me to get back to some proper training.

Currently I am working a small amount of leg training into my routine — some leg press work (because I can hold both VMOs and ensure the left is doing the same as the right) as well as some stiff-legged deadlifts and good mornings. Hopefully after the synvisc I will be able to work squats back into my program, then RDLs and the Olympic lifts themselves. My current intention is to compete in October, even if only with a token total.

One more thing. I have continued to lose weight at a reasonably steady pace and currently, I am hovering at 115-116kg (so down 24kg from my peak weight). This will help the knee a little bit and, I hope, will improve my lift totals too. When I weighed 134kg I was snatching 115kg; this means that in fantasy land your correspondent can snatch bodyweight.

This entry was posted in Weightlifting. Bookmark the permalink.